NetCIL Online applications are updated automatically.  Version information applies to companion NetCIL Desktop applications. Desktop users will be prompted to download and install updates when they become available. You can always perform a manual update by installing applications directly from the downloads section of the NetCIL website.

·         Superseded by v2.04; Transition to secure communications when checking for updates.

A brief summary of changes in NetCIL Client Versions 1.8 and CFAL 5.8 is given below.

You can associate System Barriers to individual consumer goals. The System Barriers concept was introduced in the State of Michigan to enhance their data collection and analysis capability along with their excellent Outcomes Model, which is now an inherent part of the NetCIL application. For more information about how to use the model in your center, please contact the Michigan SILC.

If you don’t want to use the System Barriers capability, you can of course disable its functionality, as you can any function in the NetCIL system, by following these instructions. 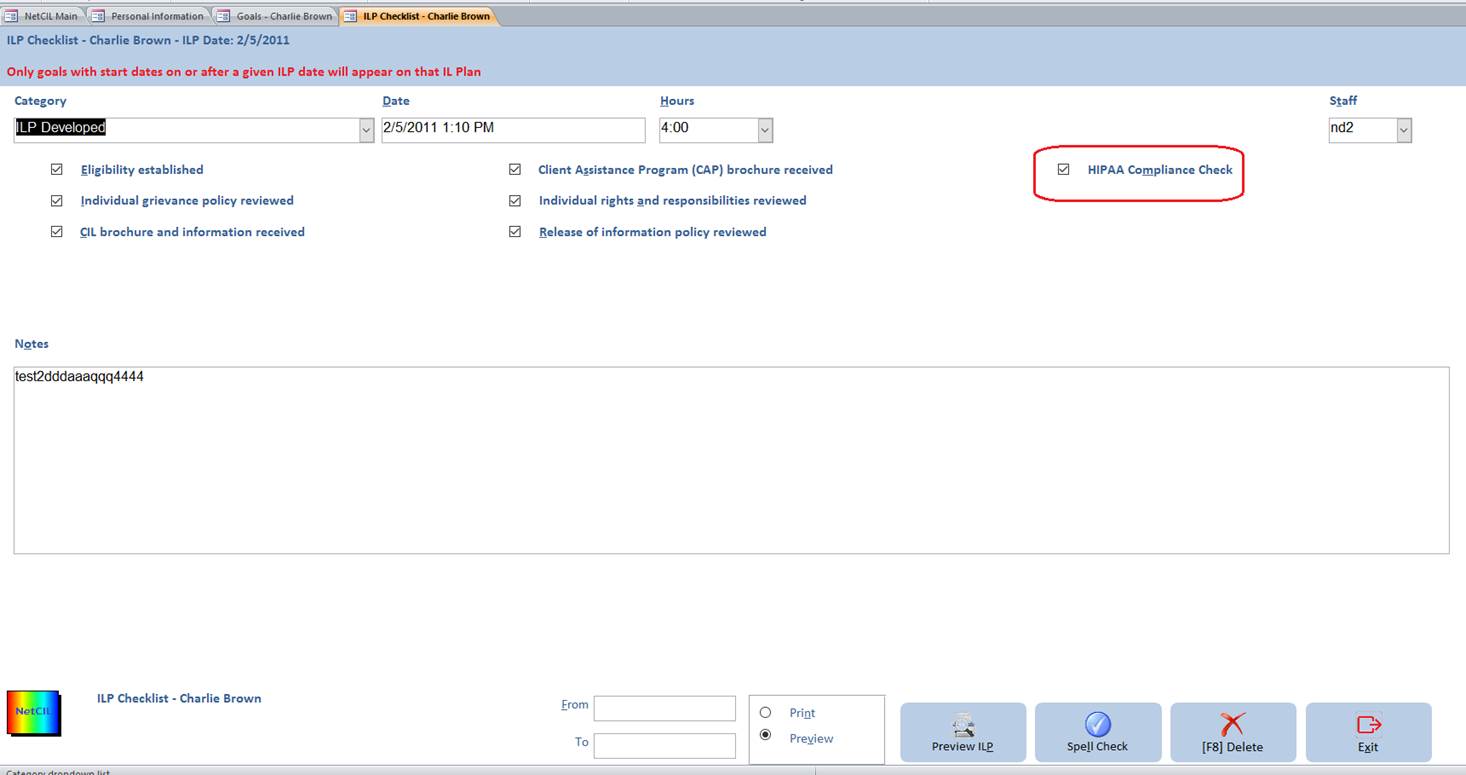 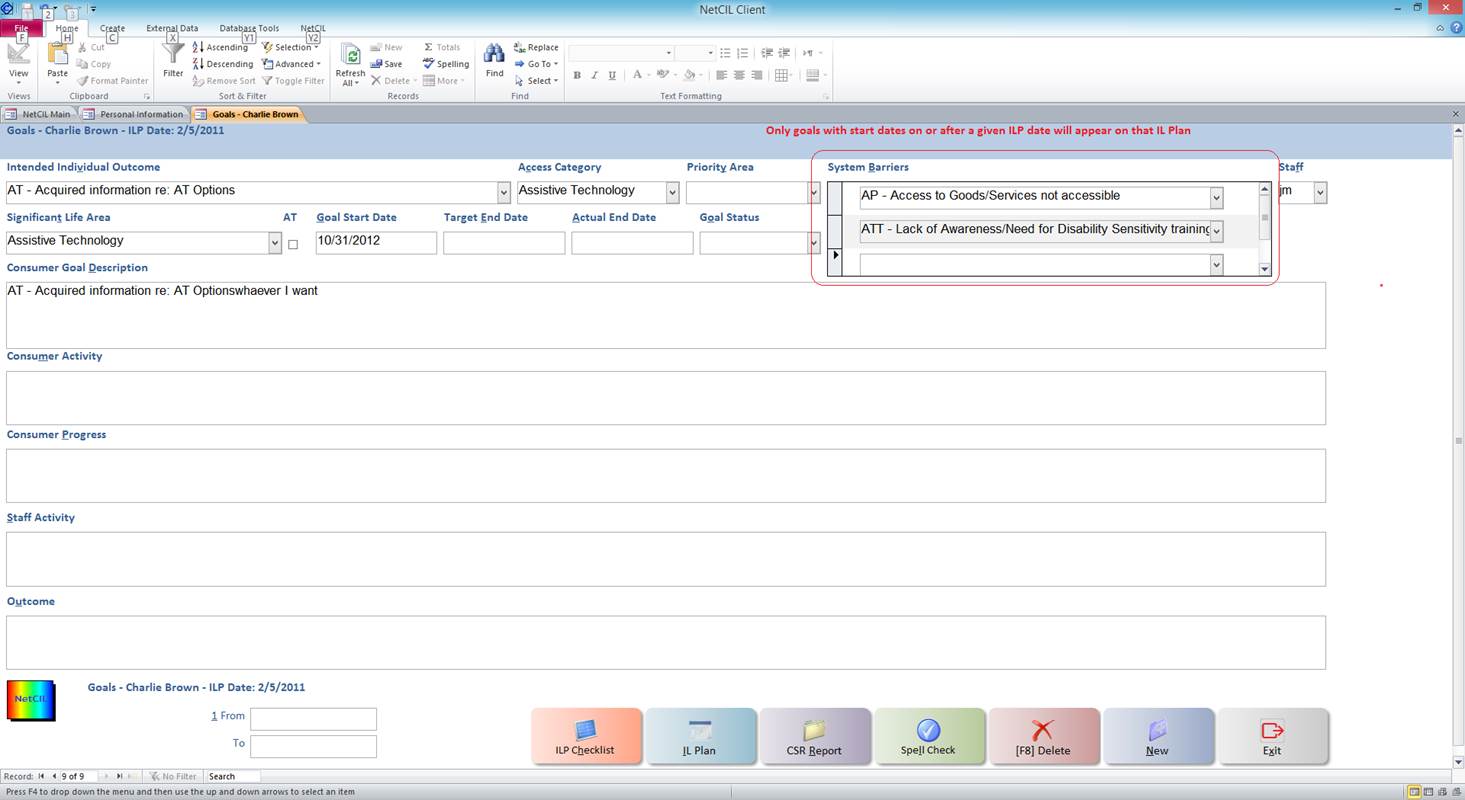 Any individual can be marked as deceased by opening Notes then selecting New… Category “Profile Change”, then selecting “Died” from the “Profile Change Category” control. For deceased individuals, age calculations will then use the date field of the note rather than the current date. These calculations are need by Parent to Parent organizations for matching purposes, but can be used by any agency for any individual. If you use this procedure for a consumer, the category will automatically be changed to “Consumer Deactivates” and standard logic for deactivation of a consumer will be used. 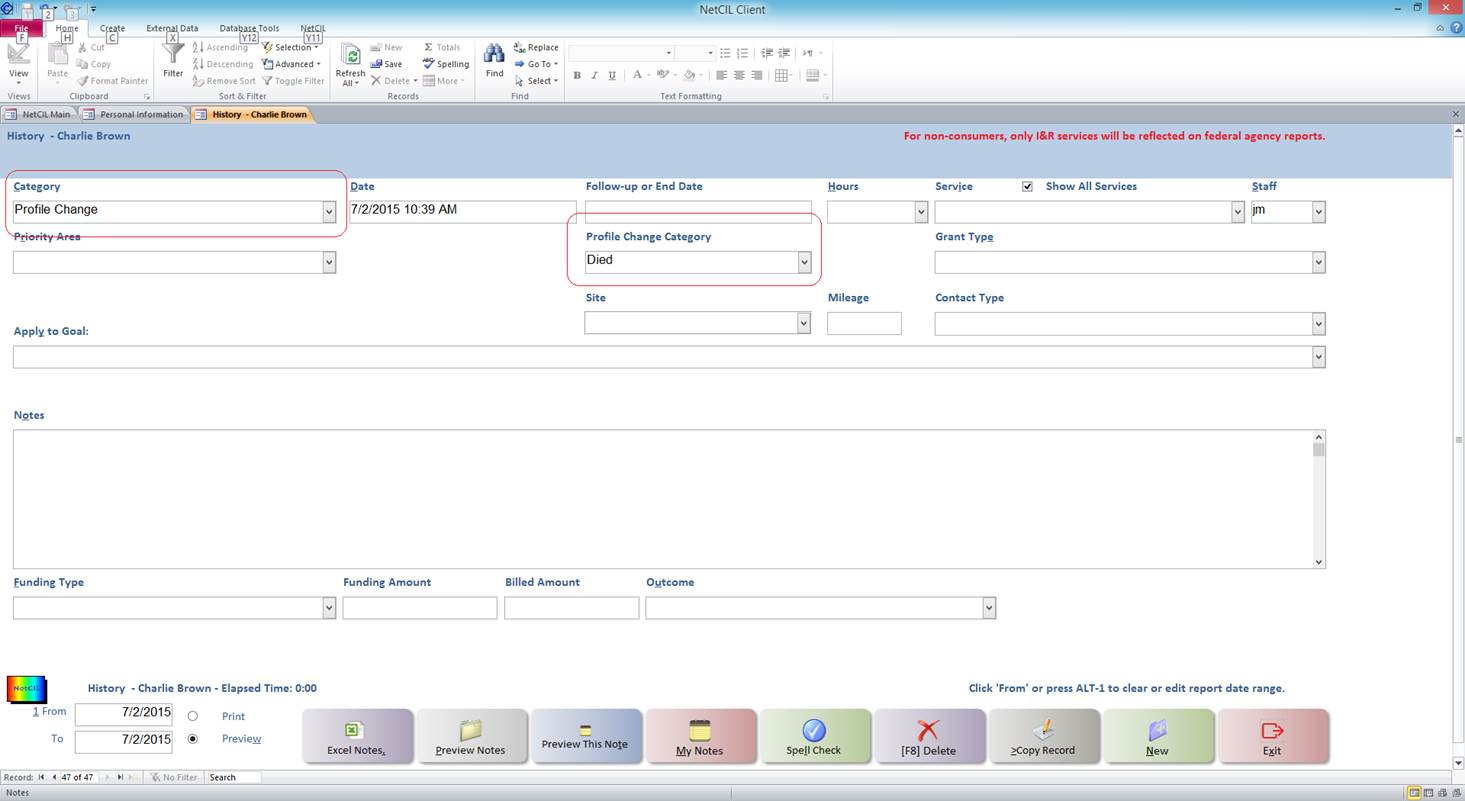 The age of deceased individuals will be marked in bold red. Screen reader users will receive a pop-up message when their cursor lands in the date field. 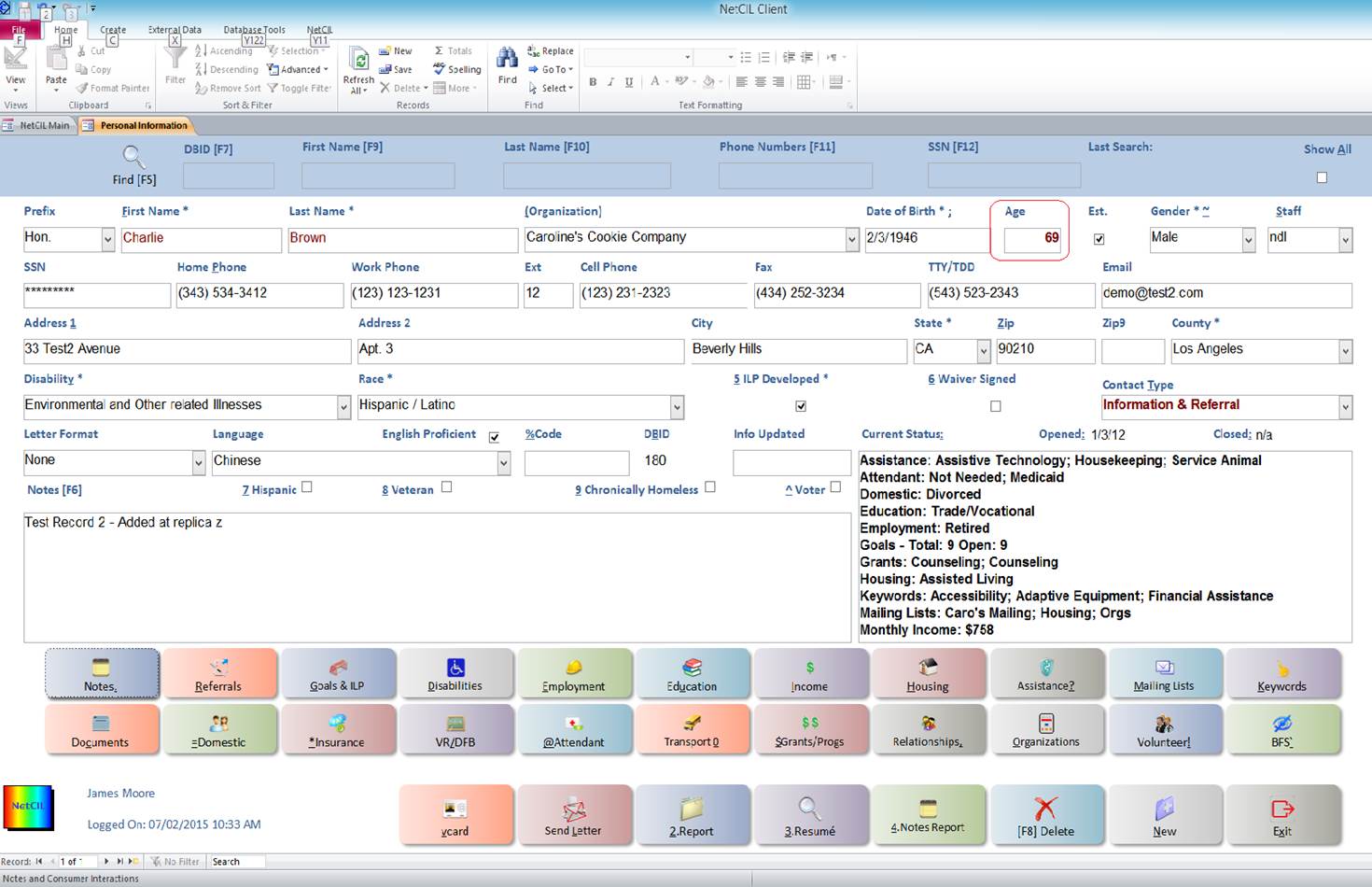 You can easily display all current consumers by selecting the “consumers” icon from the NetCIL Ribbon.

If requisite data for a consumer is missing, or if duplicate disabilities are listed, the status box will generate a warning message in bold red. 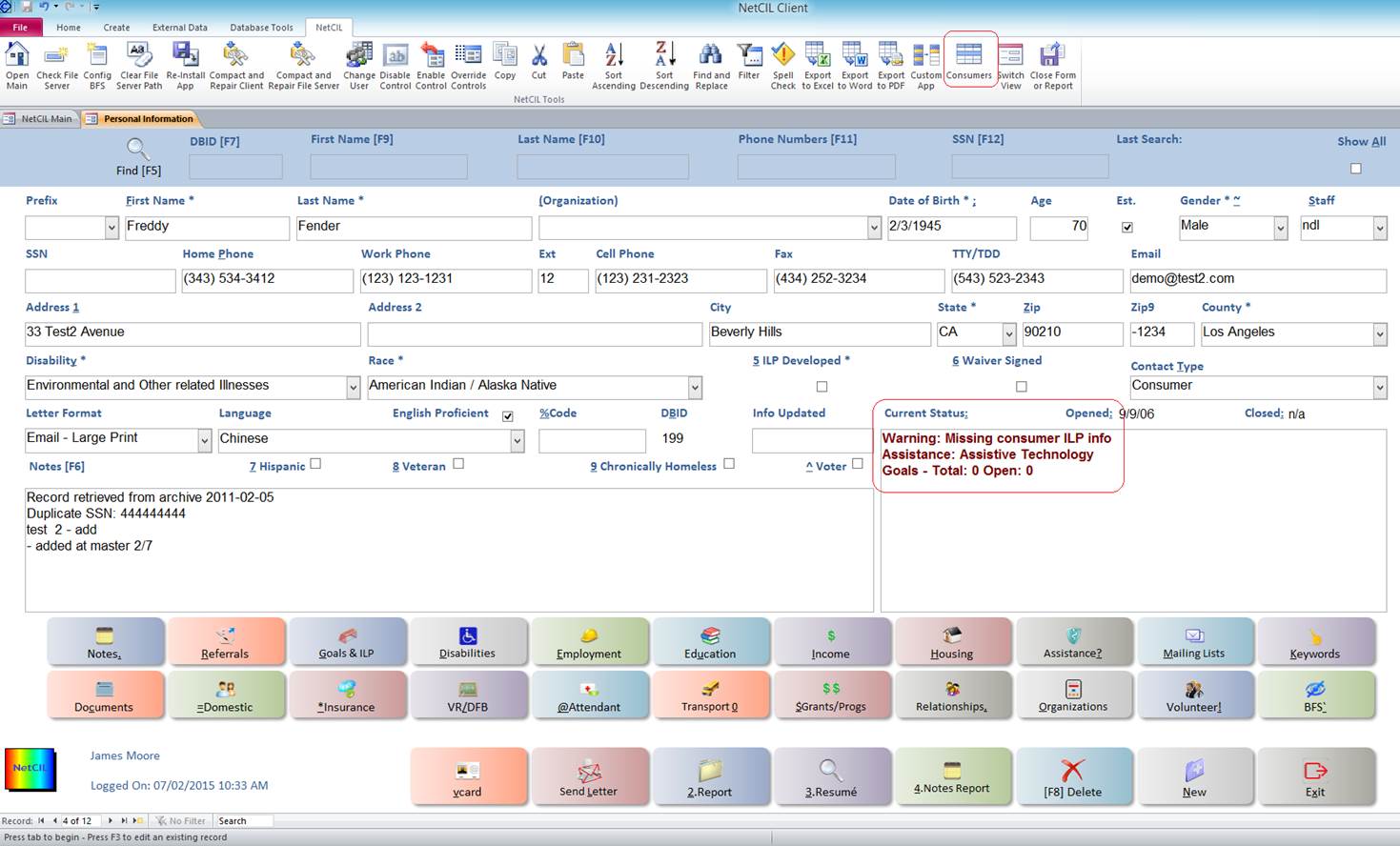 When using a replica database, users will now see an “Update” field in the upper left corner of all consumer forms. A check in the “Update” box indicates that data has been changed, and that this data will override data in the master database when a synchronization is performed. If you wish, you can un-check the box, and the associate data will not be synchronized. This capability can be useful if you know, for example, that address changes are being made in the main database, and you don’t want to override those changes with any edits that you make. Unchecking the “Update” field will not affect updates to other records or tables. For example, if you un-check the “Update fields in the People Form for Charlie Brown as shown here, any case note entries and edits that you’ve made will still be synchronized ,unless you specifically un-check the update field for those records as well.

Level 10 users have access to a query named “Config Changed Demographics”. Other users can create a spreadsheet of changed demographics by selecting the “Synchronize” button on the NetCIL Client Main screen. These features are only available when you are connected to a replica database.

The synchronization process has been streamlined and its performance has been greatly enhanced. Screen reader users can create a replica and synchronize with just a few simple keystrokes. 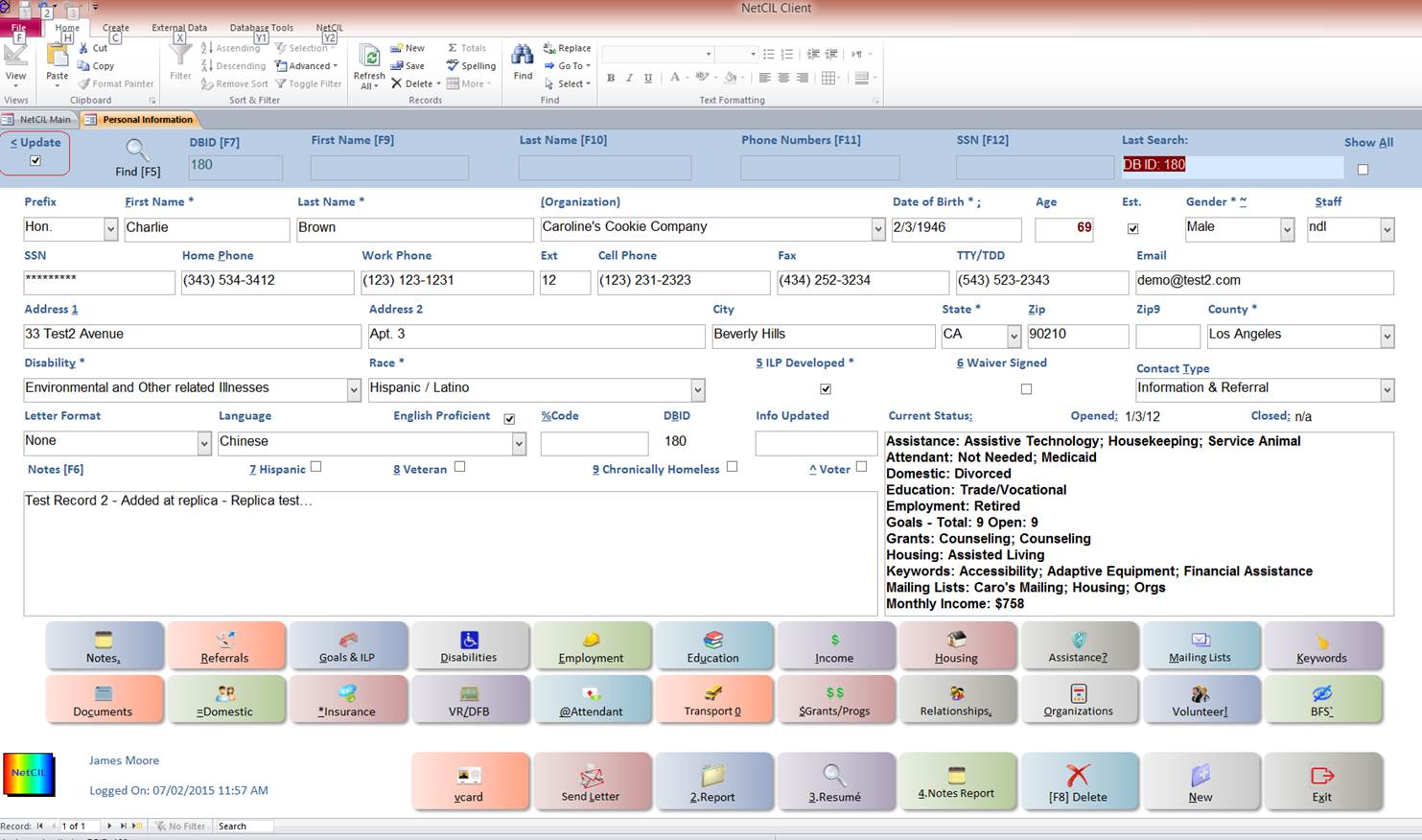 To track and report Medicare / Medicaid services, follow these steps:

-          Ensure that you have entered records that contain the words “Medicare” and / or “Medicaid” in the Insurance Codes table as shown below. 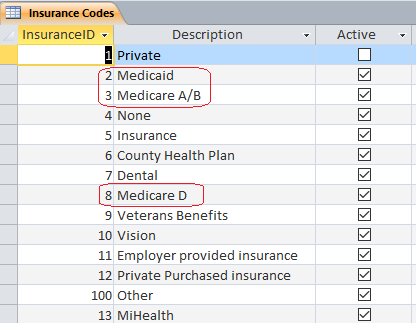 -          Create a “Medicare/Medicaid” report from the Excel Reports section of the Reports Form: 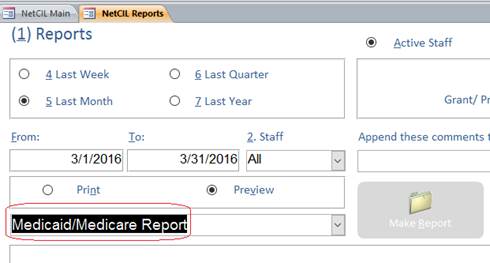 Any record in the History Codes table that contains the word “Medicaid” in the “Type” field will be treated as a “Medicaid” record:

Return to Table of Contents